The parables and the Cross 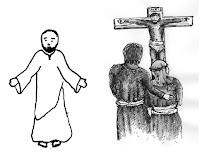 Jesus' parables
glimpsed through characters with Jesus
on the road to the Cross...
A reflection for Good Friday

Jesus in the Garden of Gethsemane
They went to a place called Gethsemane; and he said to his disciples, ‘Sit here while I pray.’ He took with him Peter and James and John, and began to be distressed and agitated. And he said to them, ‘I am deeply grieved, even to death; remain here, and keep awake.’ And going a little farther, he threw himself on the ground and prayed that, if it were possible, the hour might pass from him. He said, ‘Abba, Father, for you all things are possible; remove this cup from me; yet, not what I want, but what you want.’


The gardener
(the parable of the sower)

‘A farmer went out to sow,’ I once heard you say. I sit in the dark under my favourite tree in the old garden where I’ve sown and tended these long years - watching. Watching you wretch with sorrow, your friends inattentive and slumbering. They hardly look good soil. But I suppose some would say this patch of ground was unpromising, yet it brings peace enough to folk who come. You seemed the Good Farmer, scattering seeds of gentleness, care, wisdom. But now… The clouds part for a moment and a shaft of moonlight illuminates your face. You look straight at me, your eyes glistening with tears. I hear those ancient words, ‘those who sow in tears shall reap in joy.’ But how are you now going to reap, thirty-, sixty, a hundred-fold? A tear rolls down my own face.

Jesus is betrayed by Judas and arrested
Immediately, while he was still speaking, Judas, one of the twelve, arrived; and with him there was a crowd with swords and clubs, from the chief priests, the scribes, and the elders. Now the betrayer had given them a sign, saying, ‘The one I will kiss is the man; arrest him and lead him away under guard.’ So when he came, he went up to him at once and said, ‘Rabbi!’ and kissed him. Then they laid hands on him and arrested him.


Judas
(the parable of the wise and foolish bridesmaids)

‘Be ready!’ you said. Well, here I am Jesus, as ready as can be. Like those bridesmaids you spoke about, my lamp is lit and stoked with spare oil. And the lamps of all these oh-so-friendly compatriots of mine: they’re ready too, to cart you away. Oh yes! I’m ready to cash in — on my investment in your friendship, on the chief priests’ fear, on your folly. And here I find you in the most predictable of places. You, ready? If you’d known you’d have run. Only… you hold my gaze like someone prepared, someone knowing — as someone one, well… ready. Are you, in fact, the wise one here? Am I the fool? I grip my lamp so my eyes may see. But my heart — you see its in darkness, don’t you? I never was ready for you. But  don’t shut the door — please…


Jesus is judged by Pilate
Pilate asked them, ‘Why, what evil has he done?’ But they shouted all the more, ‘Crucify him!’ So Pilate, wishing to satisfy the crowd, released Barabbas for them; and after flogging Jesus, he handed him over to be crucified.

Pilate
(the parable of the rich fool)

I’m scared. Not that I’ll admit it, to you Jesus or anyone. Last night my wife had a dream, and woke screaming and wrenching my hair, ‘Don’t touch that man Jesus,’ she screeched; she’s scarcely let up. ‘Build up your wealth and power,’ they say, ‘then eat, drink and be merry,’ they say. I’ve done all that. Yet now I’m scared — scared of losing it all. Scared of death. Aren’t we all?… But you’re not, are you? — though this very night it’s your life being demanded of you, not mine. If not of wealth and power, what do our lives consist of? What is the truth? I’m scared, Jesus, I’m scared.


Jesus is scourged and led out to be crucified
And they clothed him in a purple cloak; and after twisting some thorns into a crown, they put it on him. And they began saluting him, ‘Hail, King of the Jews!’ They struck his head with a reed, spat upon him, and knelt down in homage to him.After mocking him, they stripped him of the purple cloak and put his own clothes on him. Then they led him out to crucify him

A soldier
(the parable of the Good Samaritan)

Take this right-hook, Jesus — mmmmph. And this whip on your back — whack. There’s nothing like a good roughing-up of a crufixee to get the adrenalin going. It’s almost as much fun as being on the Jerusalem-Jericho road. You’ll have walked it many a time, I’m sure mate, with much fear and trembling. The bandits, eh? You see, they’re OK — when you’re one of them. That was my apprenticeship, you see, before I got conscripted… Now, don’t give me that look. Like you care, or something. Like your my father — or my mother. Here, take another one — oooph. Blimey, you’re still standing, still… don’t give me that look. Maybe your own mummy will be by your cross, to peel you off afterwards and sling you over her donkey, to bandage you up in some nice hostelry. Oh, but the bandages will be burial cloths, won’t they, and the hostelry your grave — sorry mate… [agitated] Alright, so I’m evil scum… No, that’s not what you’re thinking, is it? [softening] Look, I wouldn’t want to be in your shoes (OK, so we’ve taken your shoes — sorry). You could be the guy next-door, and I’d care for my neighbour. I’m rota-ed to do the nails today. And I’ll try and do it right. You know, as painless as possible. OK, that’s not possible. But, I am on your side, you know…


A bystander carries the cross
As they led him away, they seized a man, Simon of Cyrene, who was coming from the country, and they laid the cross on him, and made him carry it behind Jesus.

Simon of Cyrene
(the parable of the lost sheep)

I’d lost my way. In life, in everything. Marriage a mess. My children: they never want to see me. My old business partners — my friends — now turn their backs. I’ll tell you the whole tale one day. But there I am, wandering into Jerusalem, one lost soul with thoughts only to drift and drink myself under the table at the festival. And then ‘Oi, you!’ from a Roman soldier, ‘carry this you lazy sod.’ I’m grabbed round the neck and thrust under this almighty wooden cross to drag up the hill. Then the criminal turns to look at me. And I know in an instant it’s that Jesus of Nazareth. It’s like the world stops, there’s just him and me. And though he’s bleeding like a sacrificial lamb, he smiles and nods and says, ‘Come on, Simon.’ How did he even know my name?! I was one in a hundred in this crowd, in a thousand even. I was lost, but now I’ve been found by Jesus. Like a lost sheep. Yes, like a lost sheep.


Jesus is crucified
And they crucified him, and divided his clothes among them, casting lots to decide what each should take.

Jesus’ mother
(the parable of the prodigal son)

You were always were a prodigal, my son. So good — yet free-spirited. Caring — yet such gay abandon. Saving so diligently,  then giving it all away. Working so faithfully for your father and me, then throwing it away for your nomadic lifestyle. ‘Come back,’ I cried (how many times?), but you never did. ‘These people are my mother and my brothers and sisters,’ you said. How could you, after all we’d done? Instead you fraternised with drunks and sluts and fraudsters, as if you were trying to make a point… Oh, Jesus my dear, what am I saying. I’m so sorry. I just love you so much. And I know you love me. I just understand so little… Your ‘heavenly’ Father: how often you spoke of him, and how lovingly. He will welcome you into his home, my darling. He’ll be standing with his arms open wide for you — he’ll be running to greet you, even now. Yes, he is, my darling — running to greet you…


Jesus dies on the cross
At three o’clock Jesus cried out with a loud voice, ‘Eloi, Eloi, lema sabachthani?’ which means, ‘My God, my God, why have you forsaken me?’ When some of the bystanders heard it, they said, ‘Listen, he is calling for Elijah.’ And someone ran, filled a sponge with sour wine, put it on a stick, and gave it to him to drink, saying, ‘Wait, let us see whether Elijah will come to take him down.’ Then Jesus gave a loud cry and breathed his last.

Jesus
(the parable of the mustard seed)

One short life. Lived in one small place. That’s all it’s been. Will it matter for anything?… Those friends, all gone now, deserted — were they just poor soil after all?… I’m just one small seed. What was it I said? I can scarcely think. A mustard seed, that’s right. (Yes, I was pleased with that one.)… Ah, seeds, they take me back, right back to the beginning. The seed of Creation, where it all began. It was good, I can picture it so vividly… Is this now a second moment of Creation? A new Creation — a new type of Creation: Resurrection? ‘Unless a seed falls to the earth and dies, it will remain just a seed’ — those words feel familiar, did I say that once? How long ago it seems. ‘But if it dies it will bear much fruit’…  The earth looks such a long way down suspended up here. And everyone is so small, so very far away… I am just a small mustard seed, and it is my time to fall to earth… I’m falling, falling, into the darkness… 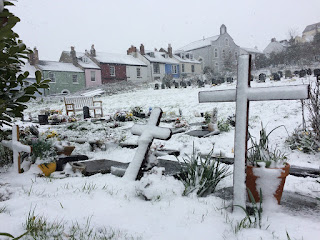 Alphaeus adds:
The Scripture passages are taken from the Gospels of Mark, Luke and John. 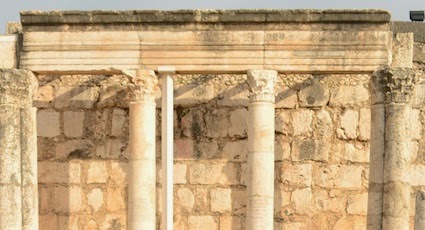 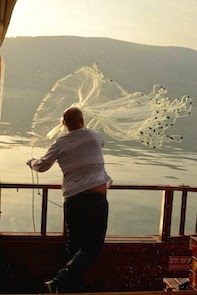 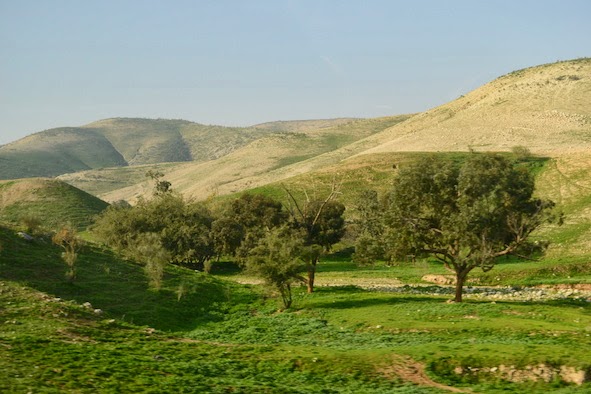 View my complete profile
content free to use, but I would be grateful if you would let me know and reference the site - thanks ☺

If you like these, I've also been playing with a collection of stories from the Old Testament, which may appear at some random point in the future...